Saša Mirković, who was called by critics the best Serbian Violist and Charismatic Artist Full of Enthusiasm is active as a soloist, chamber and orchestra musician, as well as
educator and concert organizer. His repertoire ranges from classical to contemporary music. Either when performing solo or with his Ensemble Metamorphosis, he offers
exciting concerts that occasionally include world, jazz and pop music elements, and the use of audio-visual technology.

Born in Čačak in 1980, he attended the School for Music Talents in Ćuprija, after which he graduated from the Faculty of Music in Belgrade. His professors were artists and
educators Petar Ivanović, Panta Veličković, Đerđ Zazrović, Tomislav Milošević and Dejan Mlađenović. As a soloist and chamber musician, he attended master classes with
Ognyan Stanchev, Ivo-Jan van der Werff, members of the New Helsinki Quartet and The Medici Quartet. He was a member and principal viola of the Norwegian Youth Orchestra
(Elverum), the German-Scandinavian Orchestra (Berlin) and the World Youth Peace Orchestra (Stockholm).

During the studies, he won many first and special prizes,
including special awards for performing contemporary music. Among the awards is also the premium in competition Talents for the 21 st century, in Slovakia, thanks to which he
performed as a soloist with the Slovak Chamber Orchestra under the direction of the violinist Bogdan Varhala. 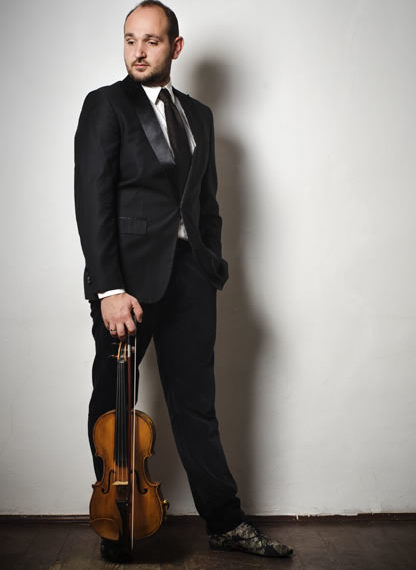 2016/2017
The end of year 2016 was particulary exciting and successful for Saša Mirković. As musicologist and editor of Radio Belgrade 2, Ksenija Stevanović, stated in her review of
the concert season (Politika, Culture supplement, December, 2016): “Last year was marked in our great and tireless performing enthusiasm of violist Saša Mirković who has
in collaboration with accordionist Vladimir Blagojević or with his own Ensamble Metamorphosis, almost “alone against all”, contributed the work of local authors to live in
concert stages, by playing twenty-four premieres and orders of our most active contemporary composers, such as Svetlana Savić, Branka Popović and others.”

In just over a month, Mirković is at the highest level held three diverse and challenging projects. Concert of music for solo viola Nach Bach +1 gathered works of contemporary
authors inspired by Bach’s suite for solo cello. Just a few days later, through the New concert music for viola and accordion, co-operation between Mirković and Vladimir
Bogojević and promotion of acheivements written for this particular duo went  successfully on. Concert Premieres and dedications has brought a new orchestral
works inspired by the activity of the Ensamble Metamorphosis and its “spiritus movens”, Saša Mirković.

Last in a series of valuable recognitions for the work came in January, 2017. Saša Mirković was declared the winner of “Music Classics” rewards for 2016, in category of
Male soloist for the year, same year Sasa received award by Serbian Assotiation of Composers “Aleksandar Pavlovic” for the best performing and presentation of Serbian
Contemporary music.
„Either playing as a soloist, with his ensamble Metamorphosis or, traditionally for three years now, with an excellent musician Vladimir Blagojević, Saša Mirković,
with his performances, sets an artistic benchmark over and over again…“ Ana Ćirica, music editor and the speaker for Radio Belgrade 2 (Radio Belgrade 2, Cultural Circles, November 2016)
„Saša Mirković managed to transform his viola into suggestive emotional apparatus with emphasised rhetorical function...”

Srđan Teparić, music critic
(Radio Belgrade 2, Ars Sonora)
“His intonation was perfect, phrasing was logical and precise, and special quality was versatility of tone colours, tone production and numerous virtuoso agogic gestures by means of which he invoked Time of Bach, on one hand, and sounded as contemporary artist, on the other. Bach never wrote suites for solo viola, but judging by what we heard last night – there is someone who would know to play it.”

Zorica Premate, music critic
(Radio Belgrade 2, Cultural circles, October 2016)
“This artist always let himself very freely to the interpretation, skillfully capturing different registers, playing confidently and virtuously” Radoš Mitrović, music critic (Radio Belgrade 2, Ars sonora, December 2016) “Performances of violist Saša Mirković in recent years have become synonym with great selected program and quality performance of global and Serbian
contemporary music. Whether performing with Ensemble Metamorphosis or in other music composition, this excellent musician and enthusiast gives to audience and grateful composers superb interpretation of new works. This kind of musicians are precious to contemporary composers, because they represent the best proof that there are people who can make new music to be attractive for the audiance.”

Srđan Teparić, music critic
(Radio Belgrade 2, Ars sonora, May, 2014)
“Nowadays, freely and without a shred of exaggeration we can claim Saša Mirković is our best violist. But not only that – this charismatic artist full of enthusiasm, along with members of the Ensemble Metamorphosis, which always stands out as an inseparable parameter of his own success, realizes performances which are more and more better and always refreshed, receptive
and full of quality programs. This allows artistic pursuit and perseverance, in the time we live and atmosphere that many people use as an excuse for their own
failures, to take on a whole extra dimension” Ana Ćirica, music editor and the speaker for Radio Belgrade 2 (Radio Belgrade 2, Ars sonora, December, 2014)

Since it was founded in 2005 the Belgrade Ensemble Metamorphosis has positioned itself on the Serbian classical music scene as an exciting group offering superb and innovative interpretations of the classical repertoire as well as music by local and international contemporary composers. From building careful and metered meditative atmospheres, to lively virtuoso sections, and powerful, furious crescendi, the orchestra confidently and decidedly brings a vast palette of colors and emotion. Metamorphosis usually performs without a conductor, led by charismatic and energetic Saša Mirković. When needed, the original lineup can be extended by other instruments, electronic and scenic elements. 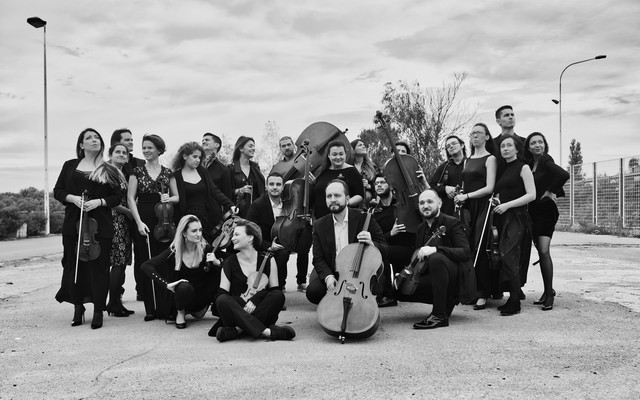 From its first days, the ensemble collaborates with Goran Bregović within the projects Orchestra for weddings and funerals, My Heart has become Tolerant, Alcohol, and Memoirs of Queen Margot, on tours and in festivals in the world’s most famous concert halls (Toulouse Theatre, Essen Philharmonic, Carnegie Hall, Avery Fisher Hall in Lincoln center, Disney Hall, Sydney Opera House, the Palace of music...) Another important project of the ensemble, based on crossover of classical and popular music, was a full concert evening with world-famous violinist Vanessa Mae, in February 2011 in Belgrade Arena. 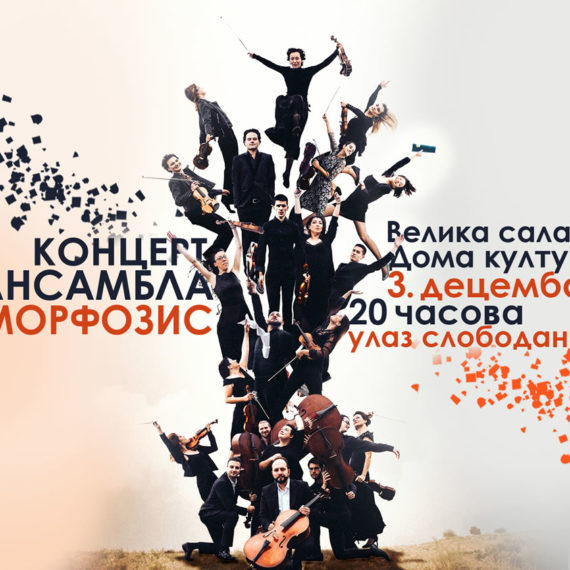 The first ensemble’s major solo concert took place on World Music Day, on June 21 st , 2010. In December of the same year, six concert works for viola and chamber orchestra had already been written for Saša Mirković and Metamorphosis, and performed in the Hall of the Belgrade Philharmonic Orchestra at the Festival KoMA. Together at festivals of contemporary music (KoMA, International Review of Composers) and through independent projects, the orchestra has so far premiered more than 80 new works, written by Serbian composers, but also by authors outside of Serbia, who have dedicated their compositions to the ensemble and its leader.

In recent years, the ensemble has performed successfully at important festivals - Bemus, Dies Organorum, Budva Theatre City, within the Cycle of Concerts at Studio 6, Lasciar Vibrare in Students CIty Cultural Centre (DKSG), BUNT, at the opening ceremony of Jeuness Musicales, Mokranjcevi dani... It has made numerous recordings for radio and television programs and is now preparing three CD releases.

In February 2017, Ensemble Metamorphosis has been awarded the prestigious annual award for the best orchestra in 2016, awarded by Muzika Klasika Magazine.

Remaining faithful to its program orientations, the ensemble Metamorphosis continues to establish itself as a modern and extremely flexible music group opened to new experiences and innovative approaches to stage expression.

“Ensemble Metamorphosis plays with such conviction, energy and whole hearted involvement, conveying much emotion and colour. A wonderful group to be listened to” DAVID TAKENO, Guildhall School of Music and Drama - Eugène Ysaÿe International Chair of Violin

“Saša Mirković approached the piece devotedly, skillfully managing to make a very rich sound framework in which he felt himself comfortable. Together with his ensemble he created strong and full sound, ranging from piano to fortissimo. Maintaining tension from the beginning to the end, performers delivered furious interpretation which was one of the highlights of the evening. “ Radoš Mitrović, music critic (Radio Belgrade 2, Autogram, Decembar 2016)